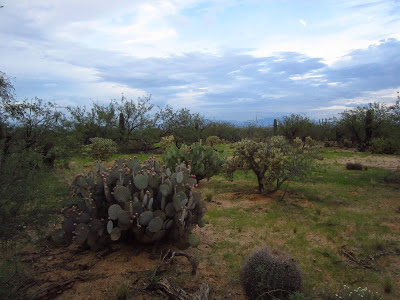 looking for locations in Rio Rico, AZ to set up my composition of cardboard cutouts was difficult because of the unpredictable rainfall.
In my original sketch of Los Olvidados , I had drawn the figures assembled in front of a tall, Saguaro Cactus. We were having a hard time locating one that we could access easily and set up the cardboard cutouts. We found a Casino called The Desert Diamond in Sahuarita, AZ off Interstate 19 that was next to a fenced area with a few tall cacti that I felt could work for the composition, but the cloudy skies obscured what little light was being emitted by the rapidly setting sun. The location wasn't ideal because of it's proximity to the Casino security cameras. Regardless, we attempted to install the full composition of cardboard cutouts and had a few people to help with the set-up. One of the people helping me was a border patrol agent, who initially was upset that I wanted to bring my project to the desert he patrols. He is a friend who wishes to remain anonymous because of the sensitivity of the issue. We engaged in a civil discussion The night before, over dinner in Tucson about my reasons for the project and he shared with me his own opinions and skepticism of my intentions. He felt that by bringing a biased idea such as my cutouts sympathizing with the migrants, I would bring more negative attention and protests to what is essentially his job. He informed me of his routine patrolling the harsh landscape. The dangers he faces daily. The boredom he sometimes has when patrolling for hours on end by himself waiting for a sign of activity. He was particularly irritated and showed his displeasure at the difficulty of ordering a cheeseburger at McDonalds nearby from a cashier who didn't speak English. As he said this to me, I thought how similar his annoyance was to Geno's Steaks in Philadelphia, PA where they have a sign that reads "This Is AMERICA: WHEN ORDERING Please 'SPEAK ENGLISH'". I also thought of my grandmother, who passed away in 2009. She spoke no english. If my grandmother wanted a cheeseburger, I went and ordered it for her because I spoke english. Between my Parents, Aunts and Uncles, Spanish is the primary language, they are all Mexican Immigrants. Between my sisters, cousins and I, English is the primary language. We are all American born citizens. It is very common for us to speak spanglish at home with family because we are essentially a hybrid, living as the first generation with a direct connection to Mexico. The border patrol agent's annoyance at the lack of English skills from an American Mcdonald's Cashier, and the irony of a proud Italian-American eatery like Geno's Steaks in Philadelphia demanding for their customers to order in English, loses sight of the fact that the border patrol agent also migrated to the Rio Rico area for the job he now has, and that Geno's Steaks in Philadelphia is in a proud Italian-American community that not long ago had a first wave of Italian immigrants who chose to settle in that area of Philadelphia and establish their community. There is no winner in an issue as complex as this, and winning an argument should not be what we search for. The fact that I had a constructive conversation with someone who did not share my views and which motivated him enough to go out and assist me in installing my project in the desert that he originally was against, opened a door that was initially closed. The experience of understanding the border patrol agent as a human separate from his job, and him understanding me as a human separate from mine, meeting in the middle, was the victory. 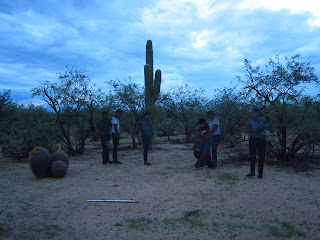 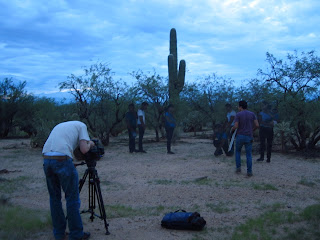