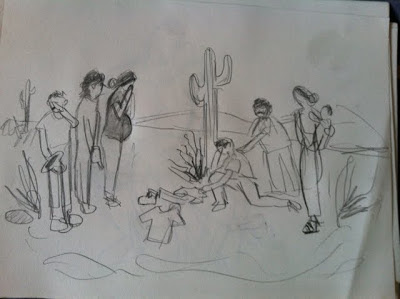 I watched an episode of Dan Rather Reports about the Angels of The Desert, a search and rescue group active along the Mexico/U.S. border. In the episode, a man searches for his brother who attempted to cross into the United States but disappeared without a trace. His family was suffering through years of uncertainty to his whearabouts and needed closure. The closure came in the discovery of clothes and bones of the lost migrant in the desert, who's brother finally had an answer he was searching for. The brother lead the search party in a circle of prayer and made peace with the loss. The scene moved me to tears and I was driven to create a composition addressing those who have died in the desert attempting the treacherous journey. I am an American born child of Mexican Immigrants who were lucky to have successfully made the move up north in search of a better life. Other's have not been so lucky, and their souls join the other lost souls of the desert. This sketch was made in the lost souls honor. It is called "Los Olvidados" and the composition was inspired by the image in the Dan Rather Reports episode of the prayer circle formed around the remains of the lost migrant. As I was making the sketch, I knew The Arizona Desert was exactly where I wanted to place the cardboard cutouts. However, I had never been to the Arizona Desert and I needed to make a personal trip to experience the area for myself before placing the installation. The Desert project was born.
Posted by Ramiro Gomez at 10:56 PM