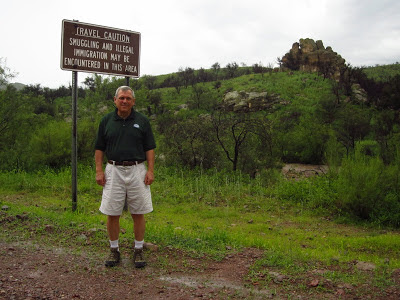 As we drove around a back road on a rainy afternoon in Rio Rico, AZ, we ventured into a campground with a Travel Caution sign that warned us of the activities in the area.
It gave me a strange feeling to see this sign, similar to something I would see in a Northern California park such as those warning us to not feed the bears. The dehumanizing aspect of the sign upset me, The words illegal and immigration next to smuggling intended to generalize all those individuals crossing as criminals. What this sign does not reflect is that smuggling is intended for an American population's relentless need for those illegal substances, a reality that I see all to often back home in Hollywood while eating out dinner at a fancy restauraunt and overhearing the entertainment industry couple next to me inquiring about where to "score some blow." It is at these same fancy Hollywood restauraunt's that one could take a glance in the kitchen and see an immigrant population responsible for the cooking and cleaning. After we finished the trip and returned home to West Hollywood, my partner David, his Father Bob (who is in this picture), and I were watching an episode of Moyer's and Company and heard, for the first time, the wonderful words of the amazing writer Luis Alberto Urrea describing his book 'The Devil's Highway'. In it, Urrea describes The North American continent as "broad (high, wide, and lonesome)" Mexico was "tall (high, narrow, and lonesome) Europeans conquering North America hustled west, where the open land lay. And the Europeans settling Mexico hustled north. Where the open land was. Immigration, the drive northward, is a white phenomenon. White Europeans conceived of and launched El Norte mania, just as white Europeans inhabiting the United States today bemoan it." His words rang so true as I had time to reflect on what the words in this sign made me feel. 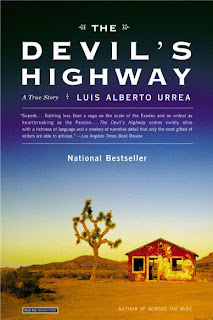